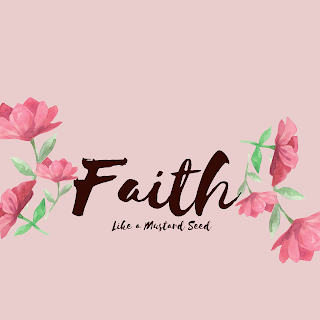 “If we are faithless, He remains faithful; He cannot deny Himself.” 2 Timothy 2:13

We have endless examples of the power of great faith: the woman who forced her way through a crowd simply to touch Jesus’ garment for healing (Mark 5); Abraham who believed God that he would have a son when he and his wife were well past the age of childbearing (Genesis 17); or the centurion with a sick servant who had so much faith that he did not request the presence of Jesus to heal his servant, but believed just a word from the Lord could do it (Matthew 8).

I realize that sometimes, these great stories of planet-sized faith make me feel guilty when I don’t have sky-high faith for some tough situations. If you are like me, whose faith doesn’t always seem like it can move mountains, this post is for you. After all, Jesus Himself said you only need faith the size of a mustard seed to be able to move mountains (Matthew 17:20) – that’s a really small amount of faith! I want to encourage us today with stories of people who didn’t have truckloads of faith, but who had just enough. And even when they began to seem “faithless,” Jesus remained faithful.

A man named Jairus also pushed through a crowd to see Jesus – his daughter was dying, and he knew that if the Lord laid His hands upon her she would be made well. While Jesus was on His way to Jairus’ house, someone came and told Jairus that his daughter had died. I know for a fact that Jairus’ faith dropped because Jesus looked at him and said, “Don’t be afraid. Just have faith.” (Mark 5:36 NLT). Jairus had enough faith to go to Jesus for a healing, but he had not planned on needing a resurrection! Even still, Jesus went to his house, shut the naysayers up and raised Jairus’ 12-year old daughter from the dead. He far exceeded the expectations of everyone there!

In a similar way, when Lazarus died, his sisters, Martha and Mary, both told Jesus that this would not have happened if He had been there sooner! Even when Jesus told Martha that Lazarus would live again, Martha did not even consider it possible in the physical realm; she thought Jesus spoke of the resurrection when the kingdom of God would finally come (John 11)! Nobody present had faith for Jesus to raise Lazarus! It’s not that they didn’t believe in Jesus – many knew He was capable of healing Lazarus (verse 37), but they all thought He was too late; the man was already dead. Even in the absence of faith, Jesus called Lazarus forth and Lazarus was raised up to live again! These people had no faith for the miracle, but Jesus remained faithful to perform it!

What is important in all these testimonies is that fundamentally, these people had faith in Jesus! Even if they didn’t have faith that their loved ones could be raised from the dead, they believed Jesus to be the Son of God who could heal. I want to be absolutely clear that faith in Jesus Christ is a must: “Without faith, it is impossible to please God” (Hebrews 11:6)! I am not suggesting that you should not believe in Christ – on the contrary, like Mary and Martha and Jairus, you must believe that Jesus Christ is the Son of God with whom all things are possible! It is because they had faith in Him that they approached Him in the first place. They all went to Jesus because they believed that if anyone could help them, it was Him. They had faith in a Faithful God, but just didn’t know how much He was capable of. They all had faith for healing but not for resurrection. The good news is, their lack of sky-high faith did not in any way affect Jesus’ sky-high faithfulness.

Some of us are not much different from the people in these stories. Maybe you have been faithfully praying for your child’s healing or your own healing, but you never considered that the situation might actually worsen. Maybe you have been expecting God to heal a strained relationship, but you never thought it would end up in a break-up or separation. You might have been believing God for a supernatural encounter with Him, only to hear radio-silence every time you pray. Or maybe you’ve been trusting God to be more financially stable, and all of a sudden, you’ve lost your job or been furloughed due to the economic recession.

You need to know that it is never too late for God! Although your faith may have been shaken up, He is no less faithful! He is still the same Faithful Father to you, because that is His nature and He cannot deny Himself (2 Timothy 2:13)! It may seem like God is too late on the scene but have faith – even if it’s just a little – and believe in God’s character even when you can’t see His hand! Believe that He will never leave you nor forsake you. Believe that He always stays true to His word. And believe that even if you’ve never seen anything like the miracle you need from Him, God can still do it! It’s not too late, even if you think all hope is lost. The darkest situations are the perfect settings for the light of God to shine brightest. Only have enough faith to continue to call on Jesus. Like the popular song goes, “When I call on Jesus, all things are possible!”