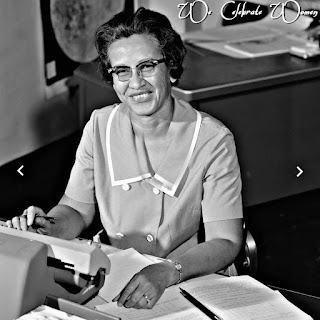 I look forward to a time when a woman wouldn't have to do twice the work in order to stand confidently where men do.
It is sad that women must go through so many prejudices. However, here is an exceptional woman, Katherine Johnson who chose to stand and fight her way through, despite such prejudices. Katherine Johnson was a physicist and mathematician who was hired by NASA (NACA at the time), back in the 1960s. Her story is that of hope in a "Man's World."

Have you been discriminated against or abused because of your race/gender?
Well, I believe that every woman is special in her realm and must be allowed to shine and be respected for her expertise!!!
As women, we can do anything and I truly mean anything we fix our minds to achieve. Like Katherine, most of you reading will soon discover why I connect with this awesome woman.

Katherine grew up in a time where segregation was the blatant order and a designated setback for a person of color, let alone a woman. She had graduated Summa Cum Laude in 1937, at age 18 and went ahead to achieve desegregation in West Virginia University the following year. What an achievement at such a young age!
Now, you might be thinking as a woman right where you are: "How or where do I begin?"
Let me break the ice by telling you how long it took Katherine to land the dream job that would cause the world to celebrate her eventually. The opportunity did not arrive until 1953. Do the math. 16 solid years.

I mean one would expect in our generation that such a genius brain should get a job of her choosing, but No, she was faced with the obstacle of harsh racial prejudice in her generation. Can you imagine a person with such credentials subjected to teaching at a small grade school? God bless our teachers, this is not to mean that there are people who do not choose their career paths in teaching, but my point is, this wasn't Katherine's path. And so she wanted more.
She didn't know how many years she had to teach but she did it consistently until her breakthrough came.
In our generation, we are lucky to have had many women fight for us. We definitely still fight the solemn battles of racial and gender prejudices, but I tell you the sky is the limit. Please do not give up your dreams for anyone, ever. 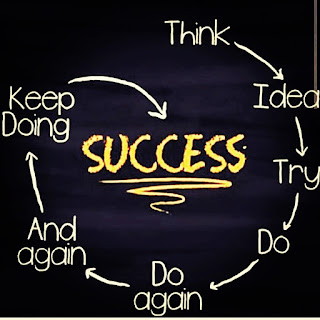 I also studied Physics and though I didn't have to face racial challenges, there were many times I could have quit, being a single parent. It was very difficult and many times I must have quit mentally but I managed to pull through for many reasons. I refused to accept failure and I had to not give up. My family, professors, advisors, friends and most especially the Grace of God did a lot for me and I couldn't have been successful without them. I mean I remember going through the whole process and how determined I was to graduate even after losing my dad that very year I was to graduate. In the end, I also ended up being the only female physicist in my set.
My point is you need the right people, resources and all you can get to cheer you on. Even Katherine had mentors who connected her to the right resources to succeed.
Perhaps, you are doing something presently that you don't like or are looking to change career path, I tell you woman, you can do it!

I honestly don't know what your set back might be. Yours might not even be close to mine or Katherine's or might be bigger than both, but the fact remains that we are women and we deserve a chance to dream big and achieve those dreams in this world.
You, a woman, you are powerful and can achieve anything you put your mind to do. Do not be discouraged by how long it might take. Just start! Just take a step! Just do it! Remember how patiently our WCW waited 16 years to finally land her dream job despite her credentials.
2017 is only just beginning!

If you want to lose or add weight this year, take a step.
If you want to go to school, you have to take a step to register.
That PhD you've been eyeing/dreading is not impossible.
If it's love and your heart had been broken one, two, many times, just try again.
If Katherine could bypass all the prejudices to become a pioneer for all women, then my lady you can and you will.
You also have a Katherine in you! Rise up to the task and achieve it.
Your boss is a male and undermines your work, don't worry about it. Be assertive and do your work with pride because you are a woman!
Just picture me cheering you on from here. Woman, you have a fan and I am telling you, you are just fine. You are enough and woman enough.

Watch this video about Katherine's life achievement and award.

Lastly, the fun part: take your girlfriends out to watch "Hidden Figures" in the theaters 1.13.17. My woman Taraji P. Henson plays Katherine Johnson along with two other beautiful actresses, Octavia Spencer and Janelle Monàe. I personally can't wait to see this movie as it tells the untold story of black female achievers, especially our WCW for today.